OK, the new trailer released last week for Warner Bros’ upcoming Man of Steel is probably one of the most effective trailers for a super hero movie ever. I am a Marvel fan, a huge Avengers fan, and Iron Man may be my personal favorite, but for some reason none of the Iron Man 3 trailers, good as they have been, have really made me think that this movie was going to rock my world. It may yet, and I’ll definitely go see it and post a review if I find something worth digging in to, but the trailers have been pretty lackluster.

The new Man of Steel trailer couldn’t be more different. It excels on pretty much every level. I’m not a hardcore Superman fan (more on that later), but after watching this trailer, I want this movie to be the summer’s biggest hit, if for nothing other than how artfully crafted the trailer is. The team that put this trailer together really flexed their muscles in three areas: Establishing the conflict, the visuals, and the performances. 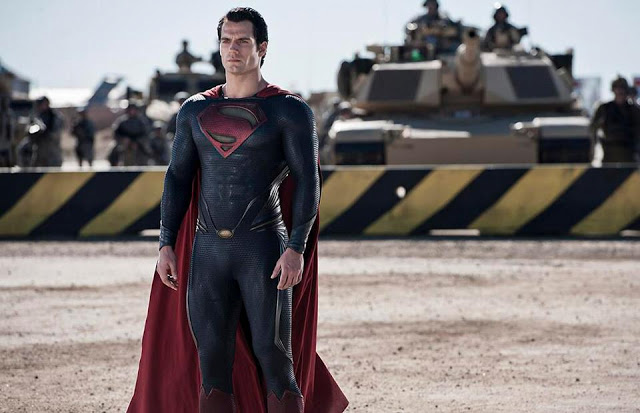 Each and every movie, each and every story, is about conflict. This shouldn’t be news to anyone. As many have pointed out, Superman’s nigh-unbounded power prunes out a lot of potential sources of conflict, as physical challenges are often central to stories about people with physical super-powers. However, that kind of constraint often brings out the best creative work, right? According to an interview with Entertainment Weekly, the Superman of MoS will be “frustrated, angry, lost.” He’ll be beset by emotional conflict.

To be specific, David S. Goyer, who also worked on the script for the Dark Knight trilogy, has said that the team is not approaching the movie as a comic book movie at all, and are instead focusing on the “first contact” themes of isolation, acceptance, and societal fear. Also at the heart of this movie will be Superman’s personal struggle to choose his destiny; it sounds like while Jor-El encourages him to be the paragon of truth, justice, and such, the Kents encourage him all his life to hide his abilities at all costs. Carrying that kind of secret, and that kind of lack of identity, around all your life will definitely weigh on you, and I’m extremely excited to see that conflict ground a Superman movie, to watch him choose the outfit (which we understand will be some kind of Kryptonian under armor), and reveal himself to a world which then feebly proceeds to try and destroy him.

Not to let the emotional themes outshine the fact that this is, in fact, a comic book movie, General Zod and his robot army will prove a physical threat to the Earth, if not to the Big Blue Boy Scout himself, that Superman will have to face. And if you were like me and saw Superman Returns and thought, “I guess fighting tidal waves and continents and such forces of nature are really the only appropriate physical challenges for Supes,” there was an extremely satisfying amount of punching and fighting going on!

And it looks like a significant amount of it won’t even be on Earth. There’s some definite military action going on around the time that Kal-El is sent away, and we see clips of laser-shooting spacecraft dog-fighting in the air, Zod and accomplices bound in what appears to be some kind of tribunal where he defiantly shouts that he “will find him,” supposedly referring to Kal-El, in addition to the shots of Mr. and Mrs. El sending off their infant son.

We know also that in this retelling, Kal-El is different from pretty much every other Kryptonian, in that he was born naturally, and not genetically pre-designed and born in a test tube. This apparently becomes a huge deal on Krypton, and may be what leads to the huge military conflict we see in the opening shots of the trailer. So not only would Kal-El be an alien on Earth, but also a genetic freak amongst Kryptonians. That might make him the only Kryptonian to get super powers in the light of a yellow sun, which would be a cool twist.

However that turns out, Krypton certainly looks alien, both from our world and the Krypton of yester-year, while still not being truly novel. The design that went into the structures, tech, and costumes here, though, looks pretty grand. I bet there’ll be whole featurettes on Kryptonian society and how its reflected in their stuff. One final question remains; is Krypton destroyed in this movie? It’s not clear in the trailer, since evidently Zod and presumably Jor-El exchange words after Kal-El is gone (“I WILL FIND HIM!” if memory serves). Kal-El may have just been sent away to protect him from the war, which was possibly specifically trying to kill him, and not from the planet’s total annihilation. That’s something Zod might unleash later after his court martial.

Looking over the cast list is pretty breath-taking; Henry Cavill, the runner-up for every big part in the last half dozen or so years, Russell Crowe, Kevin Costner, Michael Shannon, and more. They did not skimp on the talent for this movie, which just makes me more excited to see how they can push the envelope with the writing for a Superman story. The scene of Jonathan Kent revealing to a young Clark his origin, followed by the tear-jerking reaffirmation of paternal love was promising to me, though Costner still has to win me away from John Schneider’s character in Smallville.

But y’know who I’m hoping to be impressed by most? Amy Adams as Lois Lane. I am sincerely hoping that Lois Lane becomes a fleshed out character for this new take on Supes. I like the idea that she’s trying to track down this urban legend of Superman, but I hope she goes way deeper than that. I want her to have a story of her own, which intertwines with Superman. I don’t know how they’re going to develop a relationship, since it appears that their first meeting is in that interrogation room. Maybe they don’t need that yet? Maybe Lois is just the one who trusts who he is, when all the world is afraid of what he is, and thereby gives him the hope to keep going at some crucial moment.

And Amy Adams, I believe, can deliver that. She has shown an impressive range since her big break in Enchanted (following an appearance in the first season of Smallville, no less), and I’m hoping we can get a truly nuanced character that’s so much more than just the dogged journalist we’re all kind of seen enough of. That would be the crowning accomplishment of a modern, “realistic,” and grounded take on Superman, is make a dynamic Lois Lane.

This trailer has kindled within me a bright hope for Man of Steel. I grew up watching Lois & Clark: The New Adventures of Superman, I actually liked Superman Returns, but I admit I’ve never been able to really fall in love with the character. I watched Batman cartoons, Spider-Man cartoons, and X-Men cartoons, and love all of those characters. When the X-Men, Spider-Man, and new Batman movies came out, I loved those, too.  My most recent super hero love is the Avengers, because of their movies. I guess I’m saying that I – and probably many in my generation – need a Superman movie to really blow us away and speak to today’s audience. That’s what this trailer has promised; a re-imagined, relevant, riveting spectacle, both visually and dramatically. Obviously, trailers are not necessarily a reliable way to judge the movie they market for, but with the team behind this one, and the look of this trailer, the Man of Steel fills me with hope!

P.S.:  The soundtrack. Yes, this is good stuff, it backs up the action on the screen and builds everything up perfectly. But, while everyone loves to heap praise on everything Hans Zimmer puts out (which is a freaking ton), this track is little more than an interesting percussion track, a chord progression, and some non-melodic riffs in the strings. Which is most of what Zimmer’s soundtracks are. He makes one actually singable melody per movie, and the rest is just chord progressions layered on top of a driving percussion track. Inception, TDK, they all start to sound alike. I’m hoping his Man of Steel theme can go toe-to-toe with Williams’ original, and be far less subtle than his “Molossus” from Batman Begins (the only actual melody in the TDK trilogy). Gladiator was gorgeous, I just hope Zimmer will weave multiple themes in different moods through it all again.